Alternative Measures to Imprisionment in times of COVID-19 and future challenges. Follow-up to the Declaration of Montevideo 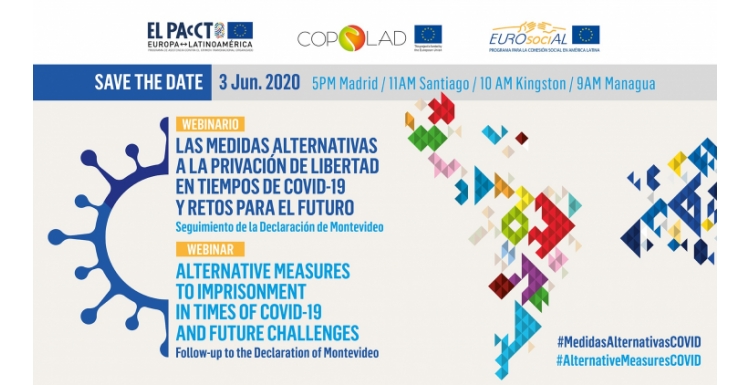 Follow-up of the contents and conclusions adopted in the framework of the Bi-regional conference on fostering the use of alternative measures to imprisonment, held in Uruguay in September 2019. The regional programmes COPOLAD II, EL PAcCTO and EUROsociAL+ are once again joining forces to continue making progress in the incremental application of these measures in the Latin American and Caribbean region, given the special circumstances that the Hemisphere is experiencing as a result of the COVID-19. The two panels planned during the Webinar aim to address the problem from various complementary approaches. With the participation of those responsible at the highest level at addressed subjects, from the institutions involved in the adoption and application of these measures in the CELAC countries.

0.3 - Ensure visibility of COPOLAD and its activities and disseminate the contents in the main political and professional forums in the field of drug policies to be held both internationally and in CELAC.
0.4 - Establish the necessary institutional contacts to avoid duplication with already developed initiatives and ensure synergies with ongoing initiatives, both within the EU and CELAC.
2.4 - Promote the identification and exchange of best practices for populations at risk of social exclusion (selective and indicated prevention), paying special attention to teens threatened by contexts of crime and violence; or other populations at risk.
3.4 - Deliver a demand-driven capacity building strategy and exchange of best practices in the field of DSR, including key issues such as alternatives to prison, money laundering and cocaine trafficking routes, which can complement and increase the coverage of other projects supported by the EU and other multilateral Agencies.
3.5 - Enhance information and intelligence-sharing initiatives by fostering direct contact between the different actors involved in this field (e.g. law enforcement authorities, specialized public prosecutors, etc.).

Alternatives to imprisonment, a necessity now and in the future

COVID-19 has highlighted the need for alternatives to incarceration to guarantee the human rights of those persons deprived of liberty, to promote their insertion into society and to effectively fight against organised crime. This was one of the main conclusions of the webinar organised by the three European Union programmes EL PAcCTO, EUROsociAL+ and COPOLAD as a continuation of the Montevideo Declaration adopted by 150 representatives from more than 30 countries in Latin America, the Caribbean and the EU in Montevideo, Uruguay, in September, during the Bi-regional Conference on Alternative Measures to Deprivation of Liberty.

At the opening of the webinar, Jorge de la Caballería, Head of Unit at the  European Commission's Directorate-General for International Cooperation and Development, stressed that "the pandemic represents an unprecedented tsunami". DEVCO's representative added that COVID “has changed many paradigms, but it does not call the relevance of the Montevideo commitments into question. On the contrary, it reinforces them. It has promoted alternative measures as a solution to the risks of infection within prisons."

Jorge de la Caballería acknowledges that “the post-COVID crisis may have a deeper impact that translates into a greater presence of crime and delinquency in general. That is why it is important for all the countries and institutions in Latin America, the Caribbean and the European Union are prepared to shape a new paradigm in relation to serving sentences, inserting people into society and fighting organised crime in prisons".

"The will to exchange experiences between the European Union and Latin America has promoted specific activities including the creation of the COVID Channel, a strategic communication channel within EL PAcCTO. It has also led to several actions being refocussed within the framework of EUROsociAL+, particularly those focused on incarcerated women, and the establishment of quality standards for treating problematic drug use,  in order to attend to the emergency from COPOLAD II,” concluded the Head of Unit with the European Commission's Directorate-General for International Cooperation and Development.

Alternative measures are penalties in every way

The executive secretary of the Inter-American Drug Abuse Control Comission at the Organization of American States (CICAD/OAS), Adam Namm, made an introductory presentation in which he stated that "80% of adults in prison had contact with the criminal justice system when they were juveniles. We need to focus more on and to invest more capital in preventive measures and programmes for youth, especially in what we call diversion programs".

" More than three-and-a-half-million people are in prisons in the Americas, with one-third of these incarcerated for drug related offenses, often for drug use or micro-trafficking. This translates into significant costs, both monetary and social. The key, of course, is identifying which drug-related offenders are committing crimes due to their substance use disorders”, Namm stated.

In addition, an interesting debate was generated with more than 60 speakers taking part. Among them, the Brazilian National Public Defender, Gabriel Farias Oliveira, the Colombian Minister of Justice, Margarita Cabello Blanco, theGuyanan Chief Magistrate of the Judiciary, Ann McLennan, the Chilean National Prosecutor and President of the AIAMP, Jorge Abbot, the Director of the National Anti-Drug Council in Suriname, Marie Regina Bunwaree, and the General Director of Penitentiary Development and Policy in Mexico, José Enrique Vallarta Rodríguez.

The webinar stressed the importance of acting immediately on three levels:

Alternative measures as a rule, not as an exception

The coordinator of the EL PAcCTO Penitentiary Systems component, Givovanni Tartaglia, was in charge of reading the conclusions and stressed that “there is no doubt that humanity has always been able to take advantage of major crises to advance in terms of building rights. Each and every one of us has a great responsibility. We are in charge of one of the greatest challenges: building a new, humane judiciary, contributing to the construction of a fairer, more inclusive and therefore safer society.”

“We have the difficult task of reinserting people into a society which, with its imperfect and uneven functioning, has contributed to their marginalisation. Alternative measures must be the rule, not the exception, for the most minor crimes and the least dangerous offenders”, Tartaglia concluded.

Anna Terrón, director of the International and Ibero-American Foundation for Administration and Public Policies (FIIAPP), Hervé Conan, deputy general director of Expertise France (EF), and Antonella Cavallari, general secretary of the International Italo-Latin American Organization (IILA) took part in the webinar's closing event. All of them highlighted the commitment of the three European agencies to continue working together on this and other matters of vital importance for international cooperation.

The person in charge of closing the webinar was Marc Litvine, senior expert-head of sector with the regional programmes for Latin America and the Caribbean at the European Commission's Directorate-General for International Cooperation and Development. Litvine stated that "prisons are a unique environment where there are many people who are very sensitive to the disease". He stressed that the work does not end here, and that the challenge for the future is joint work between all the institutions.