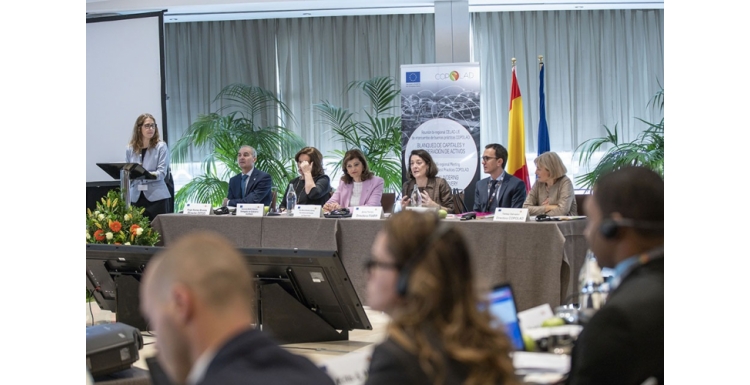 This seminar is a follow-up opportunity to continue the exchange of information/intelligence opened in C1 regarding exchanges of best practices in the area of money laundering from drug trafficking, asset investigation and the role of Asset Recovery Offices, as well as recycling the proceeds of crime into national drugs control structures. All those aspects are key to analyse emerging trends and best approaches to face all challenges in this field. In C2, special emphasis is be placed on National Legislation; the roles of Police and Public Prosecutor’s Office regarding seizure, precautionary and provisional measures and confiscation; money and other assets seizure, its legal nature and registration aspects; the identification of best practices for managing seized assets and legal tools; computerized systems for registering, informing and managing as well as the importance of international, multilateral and bi-lateral cooperation in order to locate, recover and confiscate assets.

0.1 - Establish the necessary operational bases to ensure the quality and coherence of the work to be performed and the necessary coordination and participation of all partners.
0.2 - Have adequate baseline information to: provide specificity to the contents and the actions planned in each component; meet initial expectations of each partner in relation to its participation in COPOLAD; and facilitate the programme evaluation.
0.3 - Ensure visibility of COPOLAD and its activities and disseminate the contents in the main political and professional forums in the field of drug policies to be held both internationally and in CELAC.
0.4 - Establish the necessary institutional contacts to avoid duplication with already developed initiatives and ensure synergies with ongoing initiatives, both within the EU and CELAC.
0.5 - Evaluate COPOLAD along the duration of the project.
3.4 - Deliver a demand-driven capacity building strategy and exchange of best practices in the field of DSR, including key issues such as alternatives to prison, money laundering and cocaine trafficking routes, which can complement and increase the coverage of other projects supported by the EU and other multilateral Agencies.
3.5 - Enhance information and intelligence-sharing initiatives by fostering direct contact between the different actors involved in this field (e.g. law enforcement authorities, specialized public prosecutors, etc.).

Madrid, 22 May 2019. COPOLAD, a programme financed by the European Union and managed by the International and Ibero-American Foundation for Public Administration and Policies (FIIAPP), organizes this bi-regional CELAC-EU Meeting, under the leadership of the Intelligence Centre against Terrorism and Organised Crime (CITCO, Spanish Ministry of the Interior), and the collaboration of the Government Delegation for the National Plan on Drugs (DGPNSD- Spanish Ministry of Health, Consumer Affairs and Social Welfare).

The cooperation and effective work between institutions and countries to prevent money laundering through patrimonial investigation and asset recovery have to be implemented through a coordinated effort between the specialized Anti-Narcotics Police Units, Financial Intelligence Units, Specialized Prosecutor's Offices, and Asset Recovery Offices (AROs).

In this framework, the meeting provides an adequate ground for the exchange of best practices and lessons learned facilitating further cooperation in this field between all key actors from Latin America, the Caribbean and the European Union countries, together with key multilateral institutions such as CICAD/OAS, Europol and the European Commission, among other institutions and different European Commission projects working in those fields.

In the opening session, headed by Spanish State Secretary for Security, Ana María Botella Gómez, are also participating Ángel Alonso Miranda, Director of the Centre for Intelligence against Terrorism and Organized Crime (CITCO), Spanish Ministry of the Interior; Anna Terrón Cusí, Director of the International and Ibero-American Foundation for Public Administration and Policy (FIIAPP); Azucena Martí Palacios, Government Delegate for the National Plan on Drugs (DGPNSD), from the Spanish Ministry of Health, Consumer Affairs and Social Welfare; Juan González Mellizo on behalf the European Commission Representation in Spain; and Teresa Salvador-Llivina, Director of the Cooperation Programme between Latin America, the Caribbean and the European Union on Drugs Policies (COPOLAD).

This is the third edition of a series of meetings participated by representatives of all actors involved in key areas of drugs supply control in the CELAC and EU countries. Previous editions were addressing efficient mechanisms to counteract illicit cocaine trafficking routes, prevention and investigation of drug precursors’ diversion and the development of alternatives to prison for minor drug offences.

With those meetings, COPOLAD continues the promotion of information and intelligence exchange, as well as the analysis of best practices and lessons learned, in order to strengthen increasingly effective policies capable to respond to the strategies and threats posed by transnational criminal organizations dedicated to illicit drug trafficking.