2nd COPOLAD II Annual Conference: Use of the Internet for the illicit sale of drugs and new psychoactive substances: challenges for their approach through coordinated and effective policies 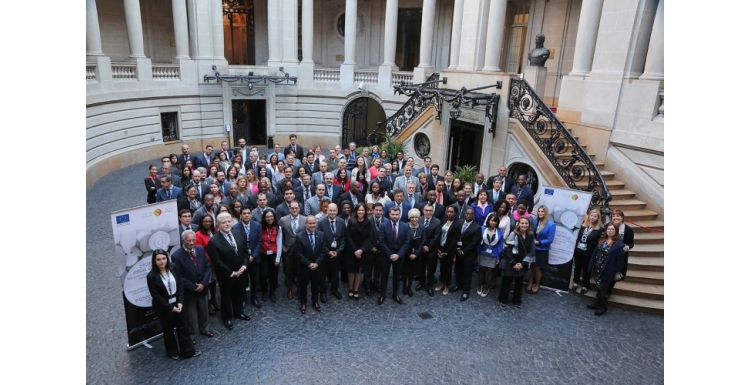 The meeting aims to bring together senior drugs policymakers from the CELAC and the EU countries. It is focused on two main topics: The Internet and the synthetic drugs.

The 2nd COPOLAD Annual Conference “Tackling two important challenges for drugs policy: Internet illegal drug markets and Synthetic drugs” has gathered all those who hold the highest responsibility on drugs policies in the CELAC and EU countries, with the purpose of sharing the current situation of the two topics of interest for the countries, aiming at optimising the responses to the new challenges that virtual drug markets, as well as synthetic substances, pose.  Additionally, the 2nd COPOLAD II Annual Conference has given the Work Groups of the programme the opportunity to present their progresses until date, in addition to explore the steps to follow during the second year of implementation of COPOLAD. The two key note speakers and 25 panellists have proposed and debated about the two main challenges addressed:

Previous to the Conference, the Permanent Council of COPOLAD has had its 2nd Annual Meeting sharing important information needed for the best progress of all the programme’s activities.

4.1 - Increase the number of opportunities devoted to strengthening the impact of the bi-regional dialogue EU-CELAC on drug policy, in the framework of the Mechanism.
4.2 - Highlight, in the framework of the Mechanism, the role of the NAs and the NDOs in designing, implementing and monitoring public policies capable of offering new and effective responses to the different challenges and problems related to drugs.

A total of 132 people have participated: 123 representatives of 46 countries and 11 organizations / institutions and 9 from the ECB (Executive and Coordination Body).

Increased the number of opportunities devoted to strengthening the impact of the bi-regional dialogue EU-CELAC on drug policy in the framework of the Mechanism
Organized at least 4 COPOLAD annual Conferences, back to back of the annual HLM of the EU-CELAC Mechanism. As well as among other activities: Financial and logistic support to all meetings of the Steering Committee of C2

Buenos Aires, 18th May, 2017. The International and Ibero-American Foundation for Administration and Public Policies (FIIAPP) and the Government Delegation for the Spanish National Plan on Drugs with the collaboration of the Ministry of Foreign Affairs and Worship of Argentina and the Secretary on Comprehensive Drugs Policies of Argentina (SEDRONAR), organised last week in Buenos Aires the 2nd Annual Conference: “Tackling two important challenges for drugs policy: Internet illegal drug markets & Synthetic drugs”.

This international meeting has become an unavoidable event for the policy makers from the EU (European Union) and CELAC (The Community of Latin American and Caribbean States) to exchange information, as well as to strengthen coordination and stablish cooperation between countries from both regions, between them and with the multilateral organisations that operate in such regions.

The Conference was opened by Roberto Moro, Secretary of State, Secretary on Comprehensive Drugs Policies of Argentina (SEDRONAR) and Gastón Schulmeister, National Director, Security Regional and International Cooperation, Ministry of Security, in the name of Argentina, and Herman Mula, from the Ministry for Home Affairs and National Security of Malta, as the representatives of the countries who shared this year the Co-presidency of the EU-CELAC Coordination and Cooperation Mechanism on Drugs. Together with the Director of COPOLAD, Teresa Salvador-Llivina, and Martin Pouliot, Head of Commercial and Economic Sector of the EU Delegation to Argentina and Sofía Aragón, Deputy Director of Institutional Relations at the Spanish Government Delegation for the National Drug Plan (DGPNSD).

High representatives and competent authorities responsible for policies on drugs in both CELAC and EU countries have presented, during these days, several examples on how the effective responses to the challenges posed by the new virtual drug markets and synthetic drugs can be optimised. Delegations from all Latin American countries discuss the increasing use of Internet and other new market options for illegal drug selling: while Caribbean countries doubled its presence compared with 2016 edition held in The Hague, 15 European countries, along with 10 international organisations, also joined the dialogue with CELAC countries.

In the Deep Web or Invisible Web (also Dark Web or Hidden Web) there is a significant number of crypto markets that are involved in the illegal drug trade protected by anonymity. The recently published study by the European Monitoring Centre on Drugs and Drug Addiction (EMCDDA), The internet and drug markets, shows the consequences of these changes in the purchase, sale and production of narcotic substances and the new challenges that CELAC and EU countries must face, given that it requires fast and effective responses, through policies that can tackle this new reality efficiently.

Jane Mounteney, key note speaker, from the European Monitoring Centre for Drugs and Drug Abuse (EMCDDA), presented a comprehensive analysis of the current situation and main challenges of the Internet as a way of selling illegal drugs, in a presentation that was chaired by Patricio Bustos, National Director, National Service for the Prevention and Rehabilitation of Drug and Alcohol Use (SENDA) of Chile.

The following table presented countries’ views for public policy to tackle the challenge that the illegal market for drug sales on the Internet represents. The panel included: João Goulão, Director of the General-Directorate for Intervention on Addictive Behaviours and Dependencies (SICAD) of Portugal; David Ramsey, Deputy Director of the National Anti-Drug Secretariat (NADS), from the Ministry of National Security of Bahamas; Marisol Palacio Cepeda, Head of Drug Policy and Associated Activities of the Ministry of Justice and Law in Colombia; Michael Tucker, Executive Director of the National Commission on Drug Abuse (NCDA) of  Jamaica; Carmen Valeria Solís, Director for Drugs and Cybersecurity, Secretariat of Foreign Affairs in Mexico, Zara Snapp, on behalf the International Drug Policy Consortium (IDPC), Martín Verrier, Subsecretary of Fight against drug trafficking in the Ministry of Security of Argentina; Yoni Dekker, from the Dutch Ministry of Health, Welfare and Sport, and Andrés Ramírez, Executive Director of the National Anti-Drug Commission (CNA) of El Salvador.

Similarly, another topic of growing concern for countries of both regions is the challenges related with synthetic drugs. According to the Report on Drugs use in the Americas 2015, elaborated by OID-CICAD, amphetamine-type stimulants constitute the most used group of psychoactive substances after cannabis. The consumption trends and patterns of MDMA in Europa match this identification. Both reports show a changing reality, which presents great challenges in both sides of the Atlantic.

Juan Carlos Araneda’s intervention, whose presentation opened a broad debate, was moderated by Sofía Aragón, Director of Institutional Relations at the Spanish National Plan on Drugs (DGPNSD). Next, Roberto Moro, State Secretary, Secretary on Comprehensive Drugs Policies of Argentina, (SEDRONAR); Cécile Martel, from the European Monitoring Centre for Drugs and Drug Abuse (EMCDDA); Evika Siliņa, Vice-Minister of Interior from Letonia, Jaime Antonio Vanegas, General inspector at the  National Police of Nicaragua; Luis Alfonzo Bello, from the Pan American Health Organization (PAHO/WHO); Rafael Parada, Inter-American Commission for the Control of Drug Abuse (CICAD/OAS); Abraham Herrera Pinzón, National Executive Secretary of the National Commission for the Study and Drug Related Crimes Prevention (CONAPRED) of Panamá; Tomas Sadilek, from the Office of the Government of the Czech Republic and Charmaine Hippolyte-Thomas, Director of the Substance Abuse Advisory Council Secretariat (SAACS) of Saint Lucia; have presented strategies and policies in the area of supply control and commercialization of the synthetic drugs.

The 2nd COPOLAD II Annual Conference was held in (Buenos Aires) Argentina from 16th to 17th May 2017.

COPOLAD’s Conferences provide a unique opportunity to CELAC and European Union government responsible for drugs related policies to jointly explore actions and strategies under a bi-regional cooperation framework. The last sessions of the Conference focussed on the achievements, advancements and results obtained in the first year of the programme (2016-2017) and the next steps for the second year of the programme (2017-2018). Thierry Dudermel, Head of Cooperation, Delegation of the European Union to Brazil and Teresa Salvador-Llivina, Director of COPOLAD, closed the Conference exploring future development both by the programme and by other related programmes financed by the EU.

The 3rd COPOLAD II Annual Conference will be held in 2018, in Sofía (Bulgaria).