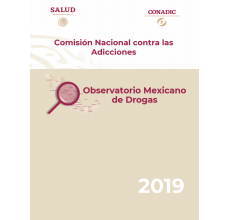 The Mexican Observatory on Tobacco, Alcohol and Other Drugs (OMEXTAD) was created in 2001, combining the efforts of different institutions, with the objective of making available to those responsible for the design of health policies, service providers, the academic community and other interested persons, the information available in the country on addictions. This effort was consolidated through the publication of three reports (2001, 2002 and 2003), the central content of which was the prevalence of consumption derived from the United Nations Surveys and the data available in the System for Epidemiological Surveillance of Addictions (SISVEA). Subsequently, the Observatory ceased operations and maintained epidemiological surveillance through the periodic commissioning of National Surveys.

In 2011, the actions of the Observatory were again promoted, this time through the launching of an information system, whose objective was to collect, analyze and report drug consumption through the data provided by the available surveys and treatment centers, both ambulatory and residential, unfortunately the system quickly lost functionality and the work of the Observatory remained unfinished.

In 2018, CONADIC resumes the actions, now with a more integrative vision and with a view to maintaining a long-term effort that favors the sustainability and permanence of an Observatory for our country. This is how the Mexican Drug Observatory was created, with a new perspective and reformulation of objectives, strategies, lines of action and institutional alliances.

Currently, the Observatory carries out epidemiological surveillance of the prevalence of drug use in the general population and various key groups, periodically monitors the demand for care in treatment centers, the demand for services in hospitals and emergency areas, as well as deaths associated with drug use, in addition to continuously disseminating its reports through an online system that is available to everyone.

In addition to these actions, it develops national reports, technical documents and promotes research projects in our country to actively contribute to informed and evidence-based decision-making.

The European Commission is preparing a third phase of this programme, therefore COPOLAD will be back at the beginning of 2021.