Towards a Health-informed Approach to Penal Reform? Evidence from ten Countries 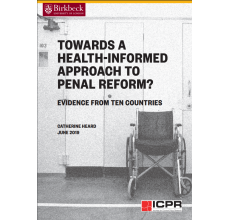 In the year 2000, the world’s prison population numbered around 8.7 million; less than two decades on, it stands at well over 11 million. The steady growth in prisoner numbers has given rise to severe prison overcrowding in much of the world, in both developed and less developed countries. Our World Prison Brief data show that prison systems are now overcrowded in well over 60 per cent of the world’s countries. When prison population growth is not matched by increased investment in built capacity, staff and other resources (as it almost never is), living conditions quickly deteriorate, as do standards of sanitation, healthcare, wellbeing and safety. The consequences for health – not only the health of prisoners and staff but also of their families and wider society – are serious.